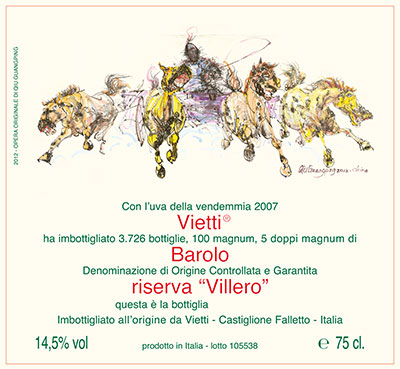 In searching for the artist that we could commission for the label of our 2007 Barolo Riserva ‘Villero’, we looked to the other side of the world. We were able to successfully enlist one of the most well-known, young contemporary Chinese artists: Qiu Guangping.

Born in 1975, he graduated from the Sichuan Fine Arts Institute in 2006. He then attained a Master of Fine Arts at the Art College of Sichuan University, becoming a professor in the same academic study-center in 2009. Guangping’s works are exhibited in major museums in China, such as Guangdong Art Museum, the Wenzhou Museum and the Shanghai Art Museum. Considered one of the most interesting exponents of contemporary Chinese art, Qiu Guangping has also showcased his delicate and ideal way of making art in Europe and the United States.  He attended the Biennale in Venice and the 39th annual exhibition at Art Basel and has had exhibitions in New York and Miami.

In the pictorial and metaphorical universe of Qiu Guangping, images of horses frequently appear, seen as individuals and also in groups. It is the impetuous force of a chariot, pushed and urged onward by the whip quivering with vehemence of a knight unknown, that decorates the label of the 2007 Barolo Riserva ‘Villero’. The strong personification of the beasts, opening their mouths in a sort of mute cry, makes them look like a symbol of the struggle for dominance between man and the earth. The horse itself is intrinsically linked to the development of civilization and humanity as a whole. The unstoppable power of running animals tamed by the whip lashing from the leader, who, equipped with armor, incites the animals to increase the trot, guiding and controlling their instincts.  With strength and perseverance man wins the fury of nature, allowing him to reap the best fruit.