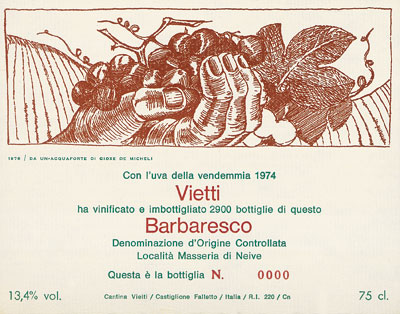 Born in Milan in 1947, and son of the celebrated critic Mario De Micheli, Giuseppe – or Gioxe as he liked to be called in the Genoa dialect – was a very promising young engraver at the time.

When he was very young he went “a bottega” by two of the most representative exponents of “Existential Realism”, Giovanni Cappelli and Giuseppe Martinelli, later in Brera, under the guidance of Gianfilippo Usellini, he attended the courses of Decoration and Affresco.

He produced an etching for us, engraved on a sheet of zinc and pulled directly onto the label for 2,900 bottles of the 1974 Barbaresco Masseria, achieving an effect of great expressive significance.