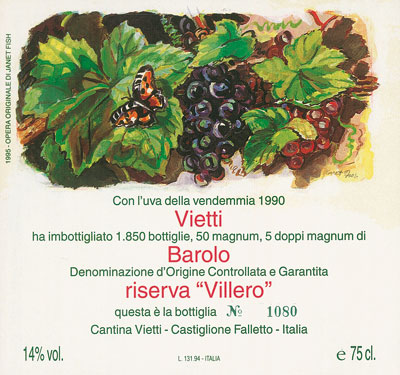 The idea of commissioning the label for this wine, the product of an outstanding vintage, from a contemporary American artist, was suggested to us by an American friend who works as an Art dealer in Philadelphia and has been following our series of Artist labels with passion for years.

She came up with the idea of Janet Fish, and put us in touch with this artist, who was born in Boston in 1938, and studied at Yale University and later the New Haven School of Art and Architecture. Janet Fish, who has shown in America, Canada, New Zealand and Australia, divides her time between her city studio in Manhattan, and a house set amidst the peace and quiet of the Vermont countryside.

The choice of an American artist for the label of the 1990 Barolo Riserva Villero, and the decision to hold the official presentation at the Restaurant of the Museum of Modern Art in New York, was also intended as a tribute to a country where we have had a significant presence for more than twenty years, ever since we began, way back in 1979, to sell our wines through 14 different small importers, first in Chicago and New York, and gradually in other cities.

The artist created a very colourful “gauche” for us, representing reality in a very bright, joyful style inspired by the figurative and Neorealist themes which are so very dear to her.

A mixed technique was then employed to create the label for the 1,850 bottles, 50 Magnums and 5 double magnums of the 1990 Barolo Riserva Villero.