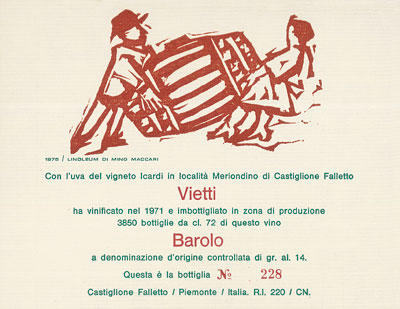 An eclectic personality (engraver, author, journalist and screenplay writer) with an exuberant character, and full of enthusiasm. Our first contact with the artist dates back to September 1976, and by January ’77 we had received not just one, but as many as four linoleums accompanied by a very neat letter in which he modestly referred to the work as a “small etching”.

The original linocut on Miliani di Fabriano Ingres Cover paper was printed directly with presses from the die on the label of 3,850 bottles of the 1971 Barolo made from grapes grown on the Icardi vineyard in Località Meriondino in the village of Castiglione Falletto.

Speaking of this label in “Vini & Liquori” in March 1977, the critic Paolo Levi defined it as “a label that makes you want to remove it from the glass, put it in a frame and hang it up”.

On the subject of the two figures in the picture lifting – “or fighting over?” – a barrel of wine, Levi underlined the subtle irony and “rural authenticity” personified by one, who -even while exerting considerable force – attached great importance to the position of his hat, as if he were taking a stroll.