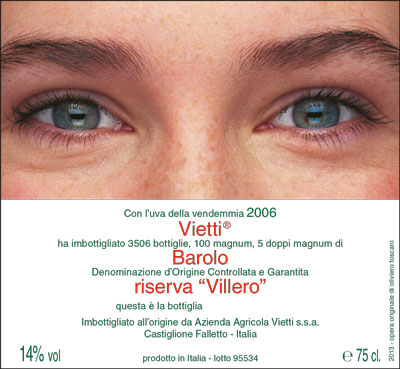 The Artist who created the work that dresses our Barolo 2006 Riserva ‘Villero’ is one of Italy’s most celebrated photographer: Oliviero Toscani.

Born in Milan in 1942, he studied photography and graphics in Swietzerland at the Zurich University of the Arts from 1961 to 1965. Since 1970 lives and works on his “OT” estate in Casale Marittimo, a beautiful Tuscan village located between Volterra and Bolgheri, where he also produces, with great passion, wine and olive oil.

Toscani is internationally renowned as the creative force behind some of the world’s most famous brands and newspapers, and as the creator of corporate images and advertising campaigns. Some of his most recent projects include work of social interest and commitment dedicated to road safety, anorexia, violence against women and the issue of stray animals.As a fashion photographer he has worked – and still collaborates today – with the national and international editions of many publications. Toscani’s work has been shown at the Venice Biennale, in São Paulo in Brazil, at Milan’s Triennale, and in museums of Modern and Contemporary Art all over the world. He has won numerous prizes, including Golden Lions, the UNESCO’s Grand Prix, the Grand Prix de l’Affichage and many Art Directors Club awards all over the world. He is an honorary member of the Leonardo Committee and of the European Academy of Sciences and Arts. He has written several books on communication, and teaches visual communication in a number of universities.

The photos which created the image and identity of a very well-known Italian fashion company are some of his most famous. In 2007 Oliviero Toscani started his “Razza Umana” photography and video project focusing on the morphology and conditions of the human race with the aim of portraying all the expressions, and physical, somatic, social and cultural characteristics of humanity. For almost thirty years he has been engaged on the “Nuovo Paesaggio Italiano” project combating what he sees as the destruction of the Italian landscape.