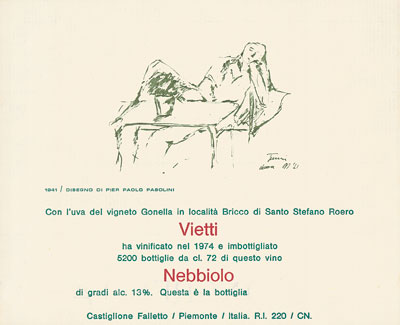 Our friendship with Pasolini began in 1974, when in his enthusiasm for the wines we had sent him he told us he would have liked to produce a film for the label, not just a drawing .

We were very shocked to hear the tragic news of his death just a short time afterwards, feeling enormous sorrow for the loss of a friend, and deep disappointment for having lost the opportunity to avail ourselves of a work by him for our “gallery”.

In 1977 we were contacted by Pasolini’s niece. Remembering her uncle’s undertaking to produce a label specially for us, she said she would be happy to let us have a work performed by him in his youth: “Tunin”, drawn at Casarsa del Friuli in 1941. We chose to pair it with Pasolini’s favourite, our Nebbiolo d’Alba made from the Gonella vineyard in Bricco di Santo Stefano Roero, which he defined as “the wine of grapes and mist, the fruit of nature when it has already fallen asleep”.

There were 5,200 bottles produced of this Nebbiolo.

Below the label Graziella Chercossi, Pasolini’s niece, writes: “Pier Paolo was very amused by the idea of interpreting this wine with a drawing: the idea has now been realized in order to make his wish come true”.