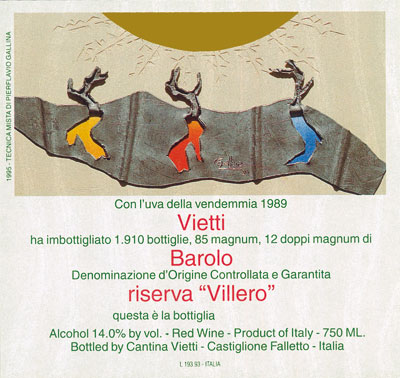 Pierflavio Gallina, born in 1948 in Santo Stefano Belbo, focused all his work on vine and wine themes.

The critic of “La Stampa”, Marco Rosci, defined his work as follows: “ …vine leaves and shoots, as well as ears of corn, the sun, the moon and rainbows, represent quite simply the foundations of his art…”.

Before the label, we had worked together with the artist on a singular operation in the Scarrone vineyard, where we were about to replant the old vines. By painting the old shoots in various, very bright colours – “yellow and violet apparitions, accomplished by a kind of alchemic virtue” – and placing metal sheets and big sun disks amongst the vines, Gallina had brought about an authentic “regeneration of the vineyard”: a link between its destruction and its rebirth.

“In its form – wrote the Artist – the vine holds the memory of experience. Art consists of perceiving energy expressed in a form. The regeneration created passes between the destruction and the rebirth of the vineyard, and the vine goes back to being the means of the rite and of the work carried out…”

This very personal concept of the relationship between art and wine led to Gallina performing another operation in 1992, this time in the vineyards of Robert Mondavi in the Napa Valley, and was the inspiration for the label of 1,910 bottles, 85 Magnums and 12 double Magnums of the1989 Barolo Riserva Villero.

An experimental journey performed with a mixed technique and the use of different materials, which was well described by the critic Lorenzo Mondo: “the vine, mostly bare and pruned, reduced to the twisted strength of its trunk or stump, becomes the allusive sign of a different world. The vine as a barbaric jewel”.