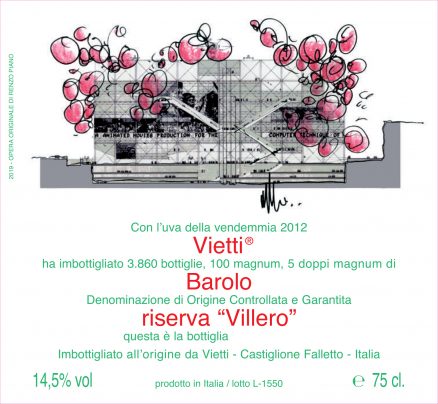 The 2012 vintage will be remembered for a series of particular climatic variations, with the varietal’s complex profile embodied in the alternating temperatures and rainfall that culminated in significant ranges in temperature during the last ten days of September and early October, allowing us to see its extraordinary cellar potential. This is why we have decided to bottle and release our 2012 Barolo Riserva ‘Villero’.

Inspiration, dedicated work and vision are what transform the grapes into a timeless nectar, just as they are the driving force behind the architect, Renzo Piano, who has designed this label full of evocative meaning: “To some extent architects find themselves translating change into a building: not always an easy undertaking, as changes are hard to assimilate, and at times it can be difficult to accept the buildings that translate and give shape to those changes. It happened to me, for example, 40 years ago with the Centre Pompidou in Paris, which represented an inevitable change. Coming only a few years after the events of May 1968, this building was to stand for rebellion, of defiance against the idea that culture should be threatening. The building therefore had to be open so as to create curiosity, and curiosity is just the beginning of cultural attitude. There is a piazza that forms the hub of urban life, where people talk and share experiences, and where diversity is transformed symbolically into a universal value.” – Renzo Piano