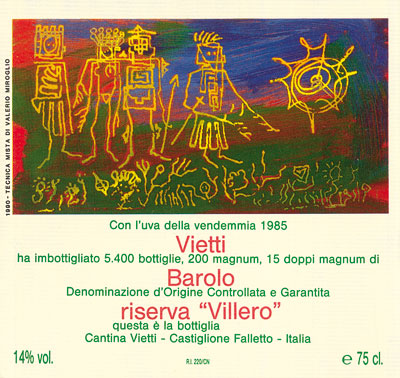 The first contact we had with Valerio Miroglio was during a visit to his studio in Asti in 1974, when – with all the necessary tact and caution – we confessed to him that we were interested in using his work.

When we called him many years and encounters later to tell him that the time had come for him to create the label for our 1985 Barolo Riserva Villero, we were amazed by the enthusiasm with which he accepted the commission, and he called us back just a week later to say that the piece was ready.

Miroglio, an eclectic artist of great vitality, had recently been struck by an incurable illness which made him very weak; he had no time to lose, and had been afraid of not finishing it in time. The work he produced presented figures in the form of graffiti, with strong blue and yellow contrasts, picking up on many recurring themes in his career as a versatile, restless, awkward artist who “had developed his critical and expressive skills into a tool working for truth”.

Valerio was not only an artist: he was also a publicist, a contributor to magazines such as “Il caffè” and “TamTam”, the editor of series of essays for small publishers, and the creator of experimental radio transmissions such as “Fonosfera” and “Audiobox”, broadcast by Radiouno in 1982; and in 1980, together with Vittoria Montalbano he founded the Arazzeria Montalbano in Asti, with the aim of reviving and providing a future for the great craft tradition of tapestry work.

When we presented our 1985 Barolo with his label on 18 September 1991, he had passed away only five days earlier following a sudden complication. His family chose to attend, however, and it proved to be a wonderful way of bidding farewell to the artist and his work, with the contribution too of the art critic Paolo Levi.