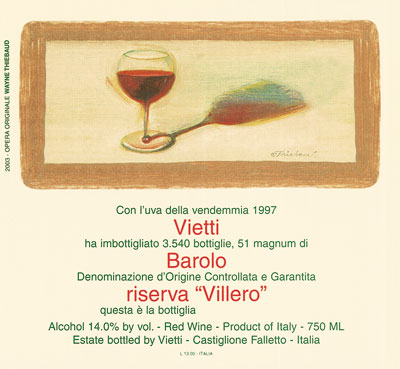 As it’s been widely reported, starting from 1995 in Piedmont we have got a series of excellent vintages, and the Barolo Riserva Villero is bottled only in these special vintages.

In 2003 we released the 1996 bottling, this year we are offering a limited release from 1997. Even though a series of such important vintages, the 1997 will be the last Barolo Riserva Villero for the 20th century. In fact we’ll have to wait until 2008 for the 2001 vintage to be released, as no other vintages will be available in the interim.

It’s a difficult decision, but we make no compromises in producing a Riserva bottling of Villero.

This has been a long-time Vietti ‘tradition.

We periodically offer wines of our special series called “Etichetta d’Autore” (wines with a specially designed artist label). commissioned by Vietti; this release from the 1997 vintages wears the label of an original engraving made by a popular American Artist: Wayne Thiebaud.

Born in 1920 in Arizona (U.S.A.), Thiebaud became one of the most well-known American Pop Artists. Thiebaud worked as a cartoonist while serving in the army from 1942 to 1945, creating a character, Aleck, for the comic trip “wingtips”.

He became an advertising artist in Hollywood for Universal Studios and he taught at Sacramento City College. In 1985 he was elected to the American Academy of Arts and Letters.

For this vintage, there were 3873 bottles produced.